We had an outstanding social event on September 13 themed Compilers meet Theorem Provers, with more than 45 attendees and three outstanding speakers.

The GSoC 2018 coding phase officially ended yesterday. We congratulate all students who particpiated!

Google requires all students to preparte a web page summarizing the work they did for their project. Here are the reports for the projects supported by Polly Labs:

We thank all students for their contributions and all mentors for their support. We hope that we could get you interested in developing for LLVM, Clang, Polly and/or isl and maybe that you continue contributing to these projects.

barvinok 0.41 was released containing only a single minor change:

pet 0.11 was released containing a couple of changes:

We are happy to announce that Google selected Polly Labs as one of the mentoring organizations for Summer of Code 2018. Our page at Google as participating organization is here. Like 2017 we will assist students to enter open source development for polyhedral optimization and compilation.

If you are currently enrolled at a university or college and you are interested in contributing in the field of polyhedral compilation, we invite you to apply with a project proposal at Google. The first step is to contact us on one of our projects’ mailing list. See the 2018 ideas and information page for more detailed instructions and ideas for projects. Hints for writing a good proposal are found on our How-to-apply page.

Consecutivity in the isl Polyhedral Scheduler report made available

The report Consecutivity in the isl Polyhedral Scheduler, describing an extension of the isl scheduler for targeting consecutive accesses, has been made available.

The GSoC 2017 coding phase officially ended today. We congratulate all students who participated!

Students prepared a page for their final report summarizing the work they did for their project. These are the reports for the students that were supported by Polly Labs:

We thank all students for their contributions and all mentors for their support. We hope that we could get you interested in developing for LLVM, Clang and/or Polly and maybe that you continue contributing to these projects.

Scheduling for PPCG report made available

The report Scheduling for PPCG, describing the isl scheduler as used by PPCG, has been made available.

NEWS: Google selected Polly Labs as mentoring organization for Google Summer of Code 2017! You are an undergraduate student or doing your doctorate? Join us to work on polyhedral compilation this summer! Here the link directly to our Polly Labs GSoC Ideas and Information Page.

Polyhedral compilation is so much more than just the LLVM Polly project and with Polly Labs as a Google Summer of Code organization we now have a new tool that allows us to host Summer of Code students to work on polyhedral modeling projects that go even beyond the scope of LLVM and gcc. LLVM and gcc have been and are in the future great places to host core compiler projects that use polyhedral compilation, but our community is interested in a lot more. Work on the PPCG polyhedral GPU code generator, the isl math library, as well the PRL run-time library, but also many other research projects (Apollo, Polly-JIT, …) benefits the greater polyhedral community, but is certainly outside of the scope of our traditional host organizations. The Polly Labs GSoC effort provides a home for such kind of projects and complements the traditional GSoC work we do in the context of gcc, LLVM, or Julia.

Google Summer of Code has a long history in supporting polyhedral compilation. Polly itself started as a GSoC project and already Polly’s older sibling, GCC/Graphite, took part in the very first GSoC years, with Tobias Grosser (today Polly Labs and ETH Zurich) being the first student in 2008 (mentored by Sebastian Pop). Only one year later, Hongbin Zheng (today lead of Xilinx High-Level Synthesis Team) worked as GSoC student on the first implementation of the Polly frontend and put together with Tobias Grosser the first end-to-end version of Polly. Over the years, many GSoC students contributed directly or indirectly to advances in polyhedral compilation or infrastructure we build on today. LLVM’s original PTX backend was developed as part of Google Summer of Code 2011 by Justin Holewinski (today NVIDIA), and today drives the GPU generation of Polly-ACC, for which again foundations were laid during GSoC 2012 and 2014 by Yabin Hu. Over the years, many students worked on Google Summer of Code projects and contributed significant pieces to polyhedral compilation in general and Polly specifically and we hope that you might be the next one. Riyadh Baghdadi (now MIT, before ENS Paris), another former GSoC student working on GCC/graphite, wrote down some great advices on “how to write a great GSoC proposal”. Check them out to follow in the footsteps of many successful GSoC students.

barvinok 0.40 was released mainly fixing some minor bugs. It will also serve as a basis for more invasive changes in the next release. 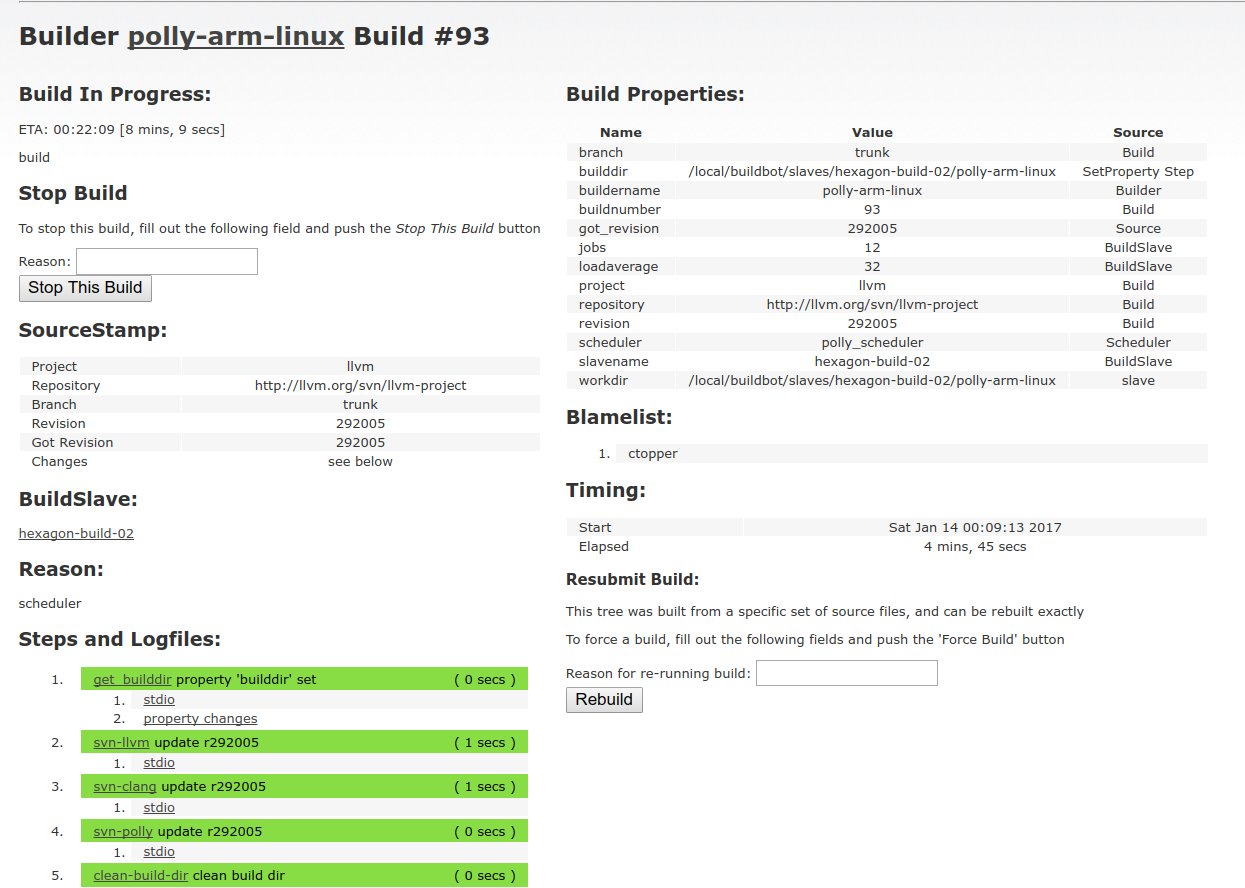 With this buildbot Polly increases its buildbot farm to nine builders. Polly runs the following builders:

Besides the standard -O3 -mllvm -polly configuration, Polly regularly tests its ability to generate parallel code, and also runs in an “extended coverage mode” called -mllvm -polly-unprofitable which forces Polly to transform each trivial loop it encounteres to provide higher test coverage on Polly’s transformation engine by transforming even code where we do not expect any performance gains. Finally, with our Polly Performance bot, we regularly report performance results to the LLVM performance tracking infrastructure hosted at http://llvm.org/perf/.

Besides the above set of buildbots, we also host a set of “Before-Vectorizer” build bots, which keep track of our efforts to move Polly into the LLVM pass pipeline with the goal to remove the need for additional canonicalization passes when running Polly. Such passes always pre-transform the IR that is fed to the LLVM standard pass pipeline and can consequently result in random difficult to avoid performance changes. After moving Polly into the Pass pipeline, we expect Polly to only affect performance in cases where our performance model predicts a clear benefit. You can find more information about this topic in the Polly Documentation.

pet 0.10 was released containing a couple of changes:

IMPACT 2017 is colocated with HiPEAC 2017 in Stockholm

IMPACT 2017, the 7th International Workshop on Polyhedral Compilation, will be taking place January 23 - 25, 2017 in Stockholm colocated with the HiPEAC conference. IMPACT is probably the venue to meet the full polyhedral compilation community and a great place to discuss your latest ideas on polyhedral compilation.

With Tobias as co-chair, Polly Labs contributes to the organization of IMPACT 2017.

The following is the official call for papers:

Tobias Grosser presented Polyhedral AST generation is more than scanning polyhedra at PLDI 2016, which was held this year on June 13-17 on the beautiful shores of Santa Barbara.

In the ACM TOPLAS paper presented, we provide detailed insights into state-of-the-art polyhedral AST generation techniques used at the heart of Polly, GCC/Graphite, PPCG, PolyMage, as well as others, and discuss concepts – outside of classical AST generation – used to enable GPU tiling techniques such as hybrid-hexagonal tiling.

Abstract mathematical representations such as integer polyhedra have shown to be useful to precisely analyze computational kernels and to express complex loop transformations. Such transformations rely on Abstract Syntax Tree (AST) generators to convert the mathematical representation back to an imperative program. Such generic AST generators avoid the need to resort to transformation-specific code generators, which may be very costly or technically difficult to develop as transformations become more complex. Existing AST generators have proven their effectiveness, but they hit limitations in more complex scenarios. Specifically, (1) they do not support or may fail to generate control flow for complex transformations using piecewise schedules or mappings involving modulo arithmetic; (2) they offer limited support for the specialization of the generated code exposing compact, straightline, vectorizable kernels with high arithmetic intensity necessary to exploit the peak performance of modern hardware; (3) they offer no support for memory layout transformations; (4) they provide insufficient control over the AST generation strategy, preventing their application to complex domain-specific optimizations.

We present a new AST generation approach that extends classical polyhedral scanning to the full generality of Presburger arithmetic, including existentially quantified variables and piecewise schedules, and introduce new optimizations for the detection of components and shifted strides. Not limiting ourselves to control flow generation, we expose functionality to generate AST expressions from arbitrary piecewise quasi-affine expressions which enables the use of our AST generator for data-layout transformations. We complement this with support for specialization by polyhedral unrolling, user-directed versioning, and specialization of AST expressions according to the location they are generated at, and complete this work with fine-grained user control over the AST generation strategies used. Using this generalized idea of AST generation, we present how to implement complex domain-specific transformations without the need to write specialized code generators, but instead relying on a generic AST generator parametrized to a specific problem domain.

Try it out in the Polly Labs playground.

isl 0.17.1 was released fixing a minor bug that was found right after the release.

Five presentations at EuroLLVM and CC

At this years Euro LLVM and CC conference in Barcelona, a variety of Polly Labs related presentations have been given.

1. Analysing and Optimizing your Loops with Polly (Tutorial)

Tobias Grosser (the lead developer of Polly) and Johannes Doerfert gave a fantastic tutorial on Polly. ‘Polyhedral loop modelling’ is an intimidating term when you first encounter it, but their explanation was clear and effective. They also showed how to derive simple loop optimisations like loop interchange in this system and the more sophisticated optimisations they’ve developed on top.

A spring school on Polyhedral Code Optimizations and Numerical Simulation was announced. Sven Verdoolaege from Polly Labs will be one of the speakers at this event. More details are available in this blog post .

An initial version of the Presburger Formulas and Polyhedral Compilation tutorial has been made available. The current version focuses mainly on Presburger formulas and on operations that can be performed on sets and binary relations defined by such formulas, but also includes some information on polyhedral compilation, especially on dependence analysis.

isl 0.16.1 was released fixing a minor bug that was found right after the release.

We are proud to announce that Polly Labs won the HiPEAC Tech Transfer Award 2015.

The HiPEAC Tech Transfer Award has been awarded to Polly Labs for the continous development and deployment of the Polly Loop Optimizer and the isl Integer Set Library. Both software artifacts are not only widely used in research, but are today part of the Snapdragon LLVM Compiler for Android shipped by Qualcomm Inc. and are investigated by other Polly Labs industry partners.

As part of Polly Labs, Albert Cohen, Sven Verdoolage and Michael Kruse from the INRIA Parkas team as well as Torsten Hoefler and Tobias Grosser from the Scalable Parallel Computing Lab at ETH Zurich we are very happy to have received this award and would like to thank again ARM for their great support.